Book Direct with the Owner at Bagdad Public Golf Course with Victoria Tourism in Bagdad, for all your Attraction and travel needs.

The Bagdad Public Golf Course is a nine-hole country course north of Hobart. Bagdad is a small rural community, 30 minutes' drive from Hobart's city centre (40 kilometres/25 miles). The Bagdad Public Golf Course has a peaceful, rural atmosphere and features watered, grass greens with the longest hole measuring 1,718 metres (5,636 feet). You can try you luck in the annual Bagdad Open golf tournament which is played here each spring (September/October). The Tasmanian town of Bagdad was named from the classic literary work 'Arabian Nights' by explorer Hugh Germain. The well-educated Germain named several Tasmanian locations from this book and from the Bible, both of which he carried with him wherever he went. Lake Tiberius and the township of Jericho are two such locations, just north of Bagdad. 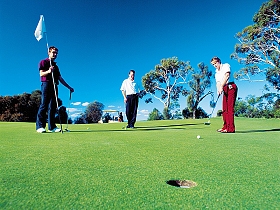 Victoria Tourism welcomes Bagdad Public Golf Course in Bagdad TAS, we offer an experience that takes you on a journey of a life time in Bagdad. For all your attraction and things to do, book your adventure today.

Is Bagdad Public Golf Course in Bagdad your property on Victoria Tourism, please claim your listing and subscribe to update your contact details and receive your phone calls and emails from your clients.