Book Direct with the Owner at Balaklava Museum Centenary Hall with Victoria Tourism in Balaklava, for all your Attraction and travel needs.

Centenary Hall is one of two sites operated by Balaklava Museum Incorporated. It was built in 1878 and has a colourful history, having been occupied by the Church of Christ, Druids and Rechabite Lodges, schools, a kindergarten and the Lutheran church. It was also used for town band and choral society practice, before being purchased by the local branch of the National Trust in 1975. No longer associated with the National Trust, Centenary Hall is now owned by Wakefield Regional Council and managed by the Balaklava Museum Committee. As a folk museum, it features the newly completed fashion gallery and music room, as well as household items, books and photographs, war memorabilia, the Alf Traeger Memorial Radio Room, and old shop fronts from the district's early days. Another significant display features a comprehensive collection of local medical, hospital and dental equipment including Australia's first use of penicillin at Balaklava Hospital. 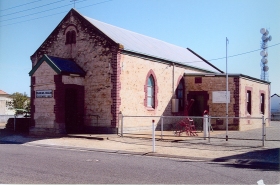 Victoria Tourism welcomes Balaklava Museum Centenary Hall in Balaklava SA, we offer an experience that takes you on a journey of a life time in Balaklava. For all your attraction and things to do, book your adventure today.

Is Balaklava Museum Centenary Hall in Balaklava your property on Victoria Tourism, please claim your listing and subscribe to update your contact details and receive your phone calls and emails from your clients.